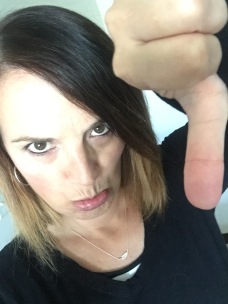 Those who know me well catch glimpses of my perfectionistic tendencies here and there. They might overhear a comment I make about imperfect grammar or watch me change outfits five times to start my day just right. But only rarely do they hear evidence of the cruelest way my perfectionism affects me for I try to keep it hidden from those around me.

I’m talking about the incessant negative voice babbling away inside my head.

It takes great effort to catch individual thoughts. The voice is so familiar I barely hear it now, it’s become a soft soundtrack running in the background as I move about my day.  But in the last five minutes as I try to be aware them, I’ve caught a few thoughts as they flitted through.

“My pants feel tight. I really need to kick it into gear, I’m getting so fat and uncomfortable.”

“My shirt feels tight too. Why did I just eat that biscuit?”

“You will never get Million Girl Army where you want it to be. What makes you think you could ever succeed at something that large?”

“Your donors are pulling away because they recognize you won’t make it. You don’t have what it takes.”

“Ugh. My hair keeps tangling in my scarf, I wish I had better hair.”

“I’m looking old. The lack of sleep and the endless worry is really starting to show.”

“Gosh, can’t I ever just be happy? Why can’t I hold on to a good mood for more than 20 minutes What is wrong with me?”

It’s exhausting. Listening to it.

How can I possibly walk bravely in a world where my own soundtrack works against me every waking hour of the day?

Be thinner. Be younger. Be more stylish. Be more inspiring. Do more. Achieve more. Be kinder. Be happier. Be smarter. Work harder.

If I’m honest, behind every individual thought is an intense need to succeed by the world’s standards. To be the one person who actually has it all together perfectly.

I derive so much self-worth from setting a “perfect” goal and achieving it that my life has become an endless cycle of goals. And yet the satisfaction from meeting them is so fleeting. The minute I reach a goal, my perfectionistic self compares that achievement to everyone else and rules I’ve fallen short. There’s always more. There’s always better.

So much of my life I’ve let it run unchecked. To fight back feels insurmountable. Sure, I logically know the power of positive self-talk. I’ve read article after article of people achieving great things through the power of positive thinking and positive imagery. At times I’ve even experienced extended periods of success quieting it.

Yet it often only takes one negative comment, one negative moment and she’s back, right there ready to concur and validate the opinion. Like a disapproving school marm always ready with an ‘I told you so.’

Forty years of conditioning. So incredibly hard to undo.

Right now I’m standing at a crossroad. I’ve started this journey to replace her voice and my perfectionistic tendencies with bravery. But I can’t be truly authentic on that journey if I’m letting her commentary run rampant unchecked in the background. Without addressing her, I’m just going through the motions on the outside while secretly letting perfectionism continue to run my life behind the scenes.

So if you see me on the street in the coming weeks and it appears I’m talking to myself, I probably am. Because starting today, for every negative thought I catch, I’m replacing it with two positive statements about myself. It’s time to take back my subconscious mind.

Because underneath the negative babble, there is a whisper of a voice asking, “What if I didn’t believe these things about myself but instead thought I was fantastic? Who would I become then? What could I do for the world?”