The alarm went off at full volume and I cracked an eyelid open. It was dark outside the windows and cold outside the blankets. With a sigh of resignation I reluctantly pushed the covers back and dropped my feet to the floor. Beside me my dog didn’t even lift his head. It was too early even for him.

Today was the day.

Kris and I had decided to try something new. As with everything lately, my immediate response when he first suggested it was a resounding no followed by excuses to try and soften the force of my answer. “It’s too early. I’m not flexible enough. The last time I tried it I found it so boring. What if I pass out from the heat?”

He had proposed we try hot yoga. There was a new studio in town that was offering a fantastic Groupon deal and Kris had heard good things about it from his co-workers.

My excuses were met with a quiet eyebrow raise. That’s all it takes these days to remind me I’m trying to be brave, not perfect. It gives me an uncomfortable extra second to stop and notice that behind the excuses is my fear of not doing something well.  Fear of imperfection, my constant companion.

That morning began my obsession and love for yoga. Much to my surprise, returning to yoga in my 40’s has been beautiful. My mind has become quieter and more reflective as I’ve aged. Learning techniques that build on that while challenging me physically stretches me in new ways. I have an appreciation for it I didn’t have when I was younger and focused on speeding through each day endlessly trying to prove myself until I collapsed in exhaustion. I find I crave it now, looking forward to each hour where I’m focused only on my breath and how my body feels, connecting with my physical self in a way I never have before.

I am not the best student. Far from it. I am certainly nowhere near perfect. But I am seeing progress. Slow but steady progress and that’s encouraging.

Sumits Yoga is done in a room heated to 105 degrees. Half the challenge is staying upright and balanced on one leg as my area becomes slick with sweat. The other half is trying to focus so I can balance as sweat pours into my eyes blurring my vision. It took only ten minutes of the first class to understand why everyone in class was barely dressed.

I have been the exception.

While I made peace with my inflexibility early on since I was working hard to even bend into a forward fold as others did so with ease resting their foreheads on the floor, long held body insecurities have kept me fully covered and extra hot.

Like most women I struggle with body image. Even when I was a size 2 and in great shape I obsessed about the small amount of extra flab I simply couldn’t shed around my midsection. During my divorce I kissed size 2 goodbye and actually learned to love my body a bit more, embracing it for what it could do rather than beating it up for my perceived imperfections.

But that didn’t mean I was anxious to strip down to a sports bra in a room of strangers.

Recently though, my inability to do so when I am beyond overheating has annoyed me. The purpose of yoga is to focus on myself, my strength, my balance, my practice, my flexibility, my breath. Looking at or judging others goes against all the practice stands for. Given I was surrounded by yoga enthusiasts, what was I afraid of? In theory, there wasn’t a group of people less likely to notice or judge my jiggly areas.

So the other day I did it.

Halfway through the session, bathed in sweat and wishing for a touch of relief, I shed my shirt.

No one giggled or pointed. No one did a double take. No one even looked my way.

In fact, the only thing that happened was I felt freer, and braver, and one smidgeon of a bit cooler. While every smidgeon of coolness counts in hot yoga, that isn’t why I will continue to shed my shirt.

I will do so to fight back against the voice in my head that tells me my body isn’t perfect enough, pretty enough, or strong enough to be shown to the world.

I will do so because I’m learning the feeling that comes with being brave is far more powerful than that voice, and is best tool I have to silence it once and for all. 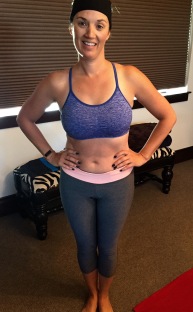